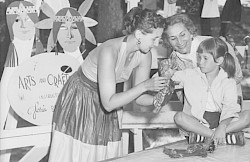 Shibley Day Camp began in a station wagon on the way to Jones Beach in the 1930’s. The driver was an ambitious young woman named Jeanne Shibley who had already made her name as one of Long Island’s best-known private dance and etiquette teachers. Her passengers were young pupils whose parents recognized Jeanne’s inventiveness and asked her to expand her program and keep the children entertained a little longer.

“Keep them a little longer” she did – first in a station wagon, then in her home, then on a magnificent Roslyn estate she purchased to accommodate her growing business. Other big land purchases followed until she had assembled the expansive acreage Shibley operates on today. At her side during this time of rapid expansion was the man she married in 1949, John C. Bell. 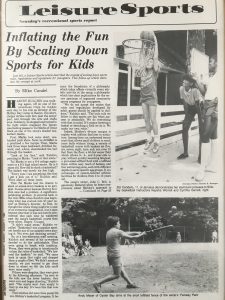 Toward the end of the 1950’s, a young physical education teacher named Harvey Kulchin came to work at Shibley as a Group Leader. Mr. Kulchin’s natural talent for creating dynamic athletic programs was just what the camp needed. He became Shibley’s Director at age 26 and, over the next half-century, virtually changed the direction of the camp. Under Harvey’s leadership, we became not only “The Day Camp with the North Woods Atmosphere,” but also “The Day Camping Leader in Sports Education.”

Along with Mr. Kulchin came generations of talented hand-picked personnel including Bill Brodsky, who gradually took over programming, adding his own innovations like our “Goose Cup” Hockey Championship along the way. Bill served as Camp Director from 2013-2015, joining Harvey’s son, Bob Kulchin who returned to Shibley as leadership staff in 1995 and now serves as director of administration and transportation.

After three generations in the Shibley Bell family, in fall 2015 Shibley Day Camp became a part of the CampGroup Family of Camps.  In 2017 experienced director & educator Heath Levine joined the Shibley family. Along with Associate Director and long time Shibley veteran Randi Chase & Bob, they are committed to preserving Shibley’s rich heritage and continuing the legacy for future generations.